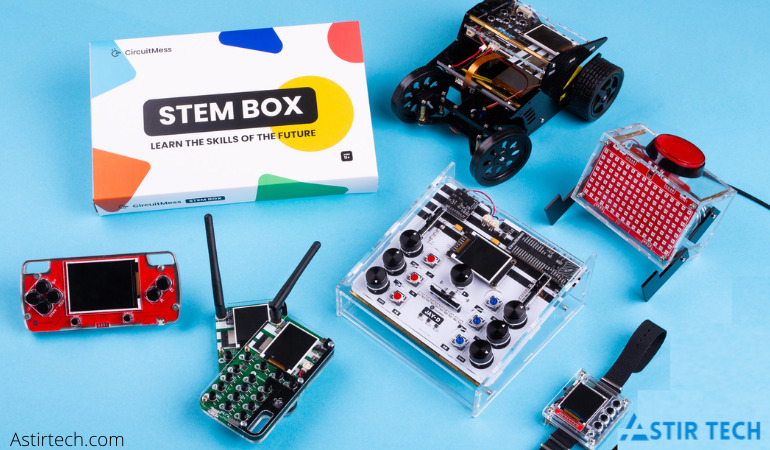 CircuitMess has introduced a STEM Box which includes a number of projects that will give you hands-on experience with STEM education. The idea of STEM Box is a subscription-based package that will provide kids and adults with an opportunity to learn STEM education.

Last year CircuitMess launched yet another successful campaign for “CircuitMess STEM Box“. Let’s see what they have in store for us this time.

STEM Box by CircuitMess is a subscription based STEM education package aimed at students and adults. To inculcate the knowledge of Science, Technology, Engineering and Mathematics.

Every three months, you’ll get a new product based on a different topic delivered to your doorstep. Here’s a peek at what the box has to offer:

Build & code your own voice assistant. Spencer is a DIY voice assistant that talks, lights up, connects to the internet, and understands simple voice commands.

Some out-of-the-box things Spencer can do as soon as you assemble him:

Build & code your own DJ mix table. With Jay-D, you’ll learn how microcomputers and other electronic components are used for sound production.

This mini mix table has almost all the basic functions a professional has, such as:

Wheelson will show you how autonomous vehicles work. This tiny wheeled robot has a camera and a microcomputer and can be programmed to autonomously navigate a small road while driving just like an autonomous car.

It has built-in Bluetooth and WiFi it also has an LCD display where you can see what the robot sees.

Build & code your own retro game console. ByteBoi is an open-source retro game console that can be assembled and programmed. ByteBoi can be coded in MakeCode Arcade. It can even be used for remote controlling the Wheelson because of the built-in Wi-Fi chipset.

Build & code your own encrypted wireless communicator. Chatter is a free, private, security-first texting device. This device does not need a cellular network or a SIM card to work because it creates its own wireless network and communicates with other Chatter devices.

Build your own smartwatch. Clockstar is equipped with a dual-core ESP32 microcomputer and has Bluetooth low energy and Wi-Fi. It connects to the phone using a mobile app and can mirror the smartphone’s notifications to its 128×128 TFT colour display. It also comes equipped with a gyroscope, accelerometer, and a magnetometer

CircuitMess STEM Box is a great tool for getting started in the field of IoT, robotics and programming. You can get the STEM box right now on their official website.

The pricing is as follows:

Hope you find this article informative, if you like this post and want more please subscribe to get notified of the latest blogs. Also check out myCobot: World’s smallest and lightest 6-axis robotic arm.